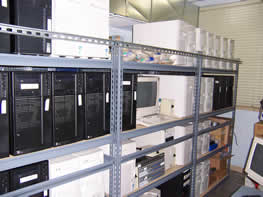 In addition to Silicon Graphics servers (4-way Origin 200 and 2-way Octane) operated by the Callis Group, in the last years the Department's computational chemistry resources have been significantly expanded by the installation of a 72-processor heterogeneous, Linux cluster with Intel and AMD 32- and 64-bit processors. Majority of the hardware were assembled and tested by Colfax International Co.

These compute servers are organized into clusters of workstations (COW-s) with fixed hardware and software configuration. While the configuration seems to be rigid, it allows for a highly-efficient resource distribution (HERD) with limited system maintenance. Each COW is tuned toward a specific function. Some provide the resources for large scale structural optimizations and potential energy urface studies (DFT and ONIOM) and others are used in high accuracy calculations of electronic structure and spectroscopic features.

These tasks are carried out by modern quantum chemical packages such as Gaussian 03, Amsterdam Density Functional 2005, and Jaguar 6.0. Method development work is supported by Fortran and C compilers from Portland Group Inc.

The computational servers has been utilized by various members of the department in collaboration with the Szilagyi Group. Visitors, such as summer REU undergraduate students during the Summer can also gain access to these servers. More information about the current status of the cluster, technical details, and some benchmarks can be found at the computational chemistry research group webpage.

Department of Chemistry & Biochemistry
103 Chemistry and Biochemistry Building
PO Box 173400
Bozeman, MT 59717
Tel: 406-994-4224
Fax: 406-994-5407
We are an inclusive and supportive department and welcome all individuals
who are interested in chemistry and/or biochemistry to contact us for information.